We appreciate you letting your friends know so we can grow; And thanks for leaving a kind review

A midnight Black Adelaide Wedding Car from Adelaide Classic Benz truly looks amazing when polished to a mirror shine. Such depth of shine creates many reflections for your photographer to exploit on the day … and really makes a stunning contrast to your Bridal Gown, PARTICULARLY making your Bridesmaid’s Colour theme really POP! 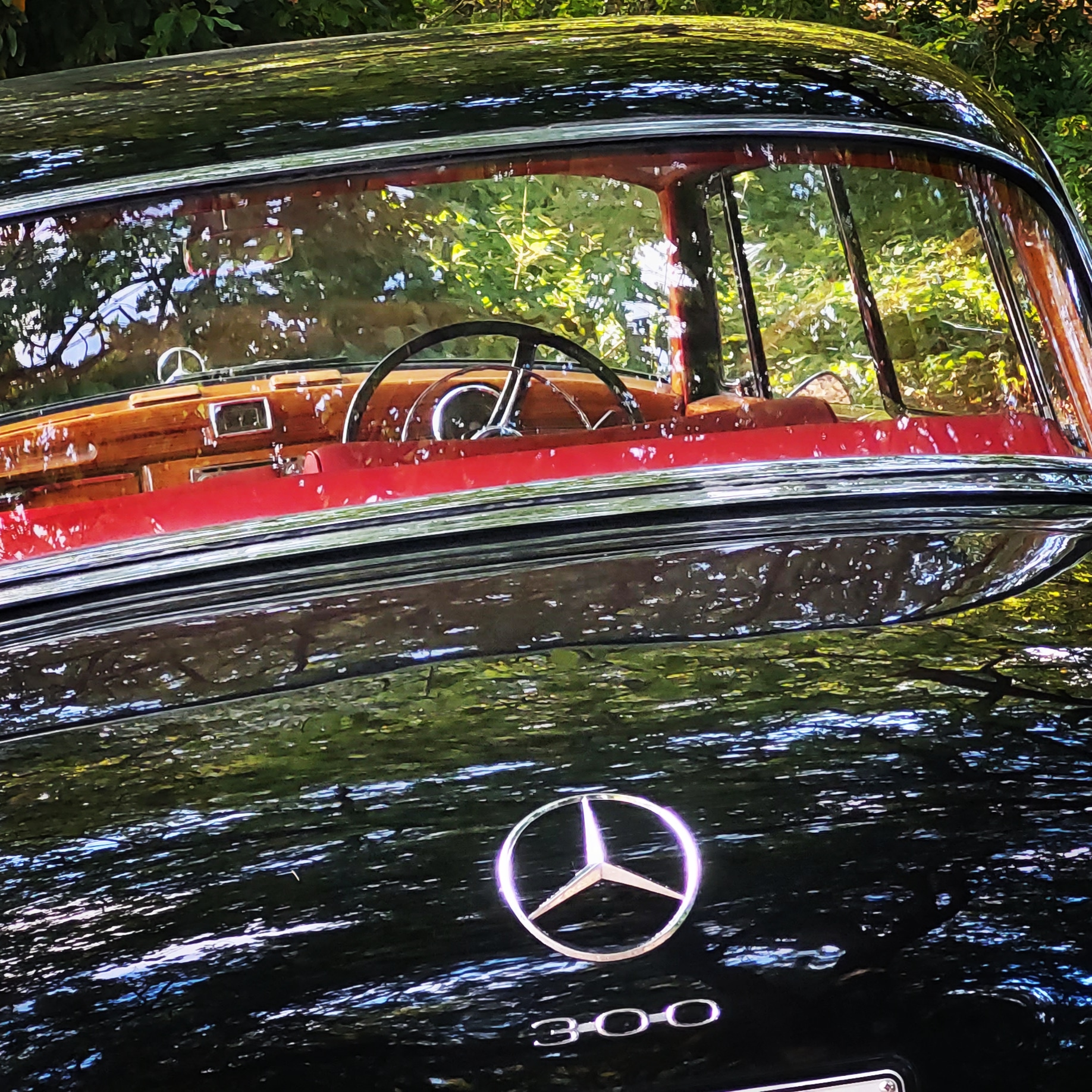 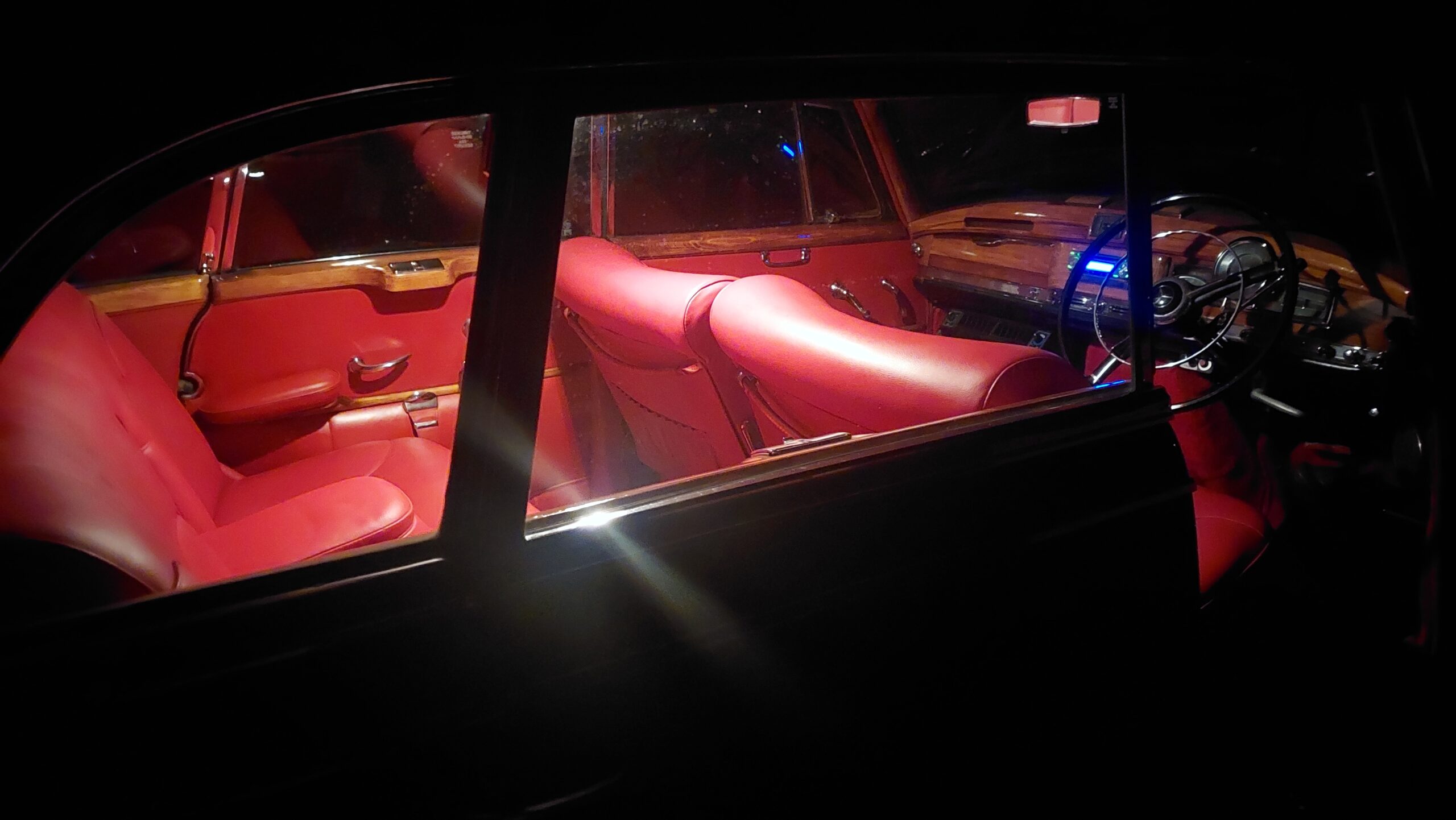 We’ll Get you there without fuss

Our accredited chauffeurs are given ample time to get to their destination, which means your journey will be unhurried and relaxed. Enjoy the Day!

Our drivers are experienced and familiar with Adelaide Metropoliotan and regional roads, so you can rest assured you will get to your destination in a timely manner

Tissues on Hand for make-up mishaps or the odd tear … and Umbrellas are available for inclement weather. Our cars are mechanically inspected annually and have full accreditation

We have bottled water available as a standard part of the service, but sometimes on a long day extra catering is a nice touch and can be arranged on request Long known for their technical innovation and pursuit of engineering excellence in addition to Luxuriously-appointed interiors, Daimler  Benz created some of the world’s most beautiful cars in the 1950s. The 300D was no exception, of which “Konrad” is a fine example. I have named him after the Famous German Chancillor “Konrad Adenauer”, who owned 6 of these ‘300’ limousines throughout his decade-long tenure. He loved them, and it’s easy to see why – they truly are a magnificent super-car of their day, fit for a statesman, and came fitted with independent rear suspension, and later on had Mechanical Fuel injection and power steering giving them superlative performance, even compared with Arch-Rival Rolls Royce. It is because of this link that they became known as the “adenauer mercedes”, and they were placed at the very top of the already exclusive Daimler-Benz passenger vehicle hierarchy during the 1951-1962 period.

Same size as limousine but no glass partition in this example

An exclusive car with very high price tag even today

Famous passengers include The US President JF Kennedy

Makes a perfect ‘Lead car” for the Bride and can accomodate a very large gown and or bridal train.

Konrad the 300D is really in a class of his own, and was the flagship model offered by Mercedes-Benz back in the day, a grandfather to the legendary ‘600’ Grosser that followed, which was THE choice of Dictators & Despots; basically the best production car one could buy; But that’s not to say Ponty is some ordinary ‘shopping trolley’. This car is a formidable luxury sedan of the day, which also had performance and prestige. As such he makes a perfect partner car to Konrad, or you may admire his styling in preference. A pleasure to drive – silky smooth 6 cylinder motor and gear box, as opposed to Konrad’s advanced automatic transmission, he really is comfortable, classy & a real “goer” too!. A true gentleman’s sports saloon you might say.

Affectionately known as the “Roundie” for its curves or “ponton” meaning pontoon. With the Internet spreading like wildfire and reaching every part of our daily life, more and more traffic is directed to websites in search for information.

Dont’t take our word for it – here’s what our clients say:

call us! It will only take a minute to chat about your Special Day

Dedicated and passionate about making your Special occasion Run Smoothly!

Latest news from our blog

write us or contact us on our social media